Portrait Cameo of a Daughter

Portrait Jewel for a Wedding

Display your gemstone cameo portrait in a variety of settings. In the past cameos have been worn as a brooch pin, necklace, bracelet or ring. Today pendants and necklaces are the most popular choices.

Custom Made Cameo Pendant with Pearls 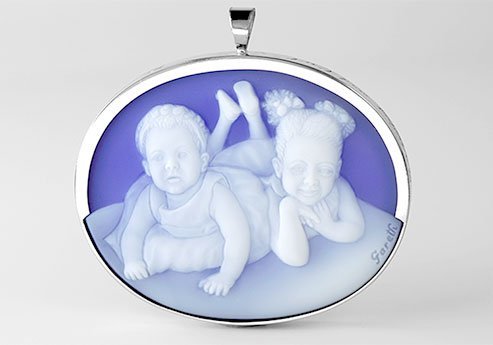 A dual purpose jewel adds versatility. This is a Pendant that has a pin attached to the back. Your cameo can now be worn as a Brooch or as a necklace.

When I design jewelry I think about how the customer will feel when they wear their jewel. I want to create as much love and attachment for their special gift. A cameo portrait carved in the image of someone you love is such a personal and unexpected gift. The most common response is overwhelming and often leads to tears and a very emotional positive reaction.

Portrait Jewel Necklace of a Grandma

I have found that adding a personal message and a touch of whimsy to the setting really does add an extra dimension that can surprise and delight. Some of my favorite cameo jewels have been where I engrave the child's drawing onto the back of the setting.